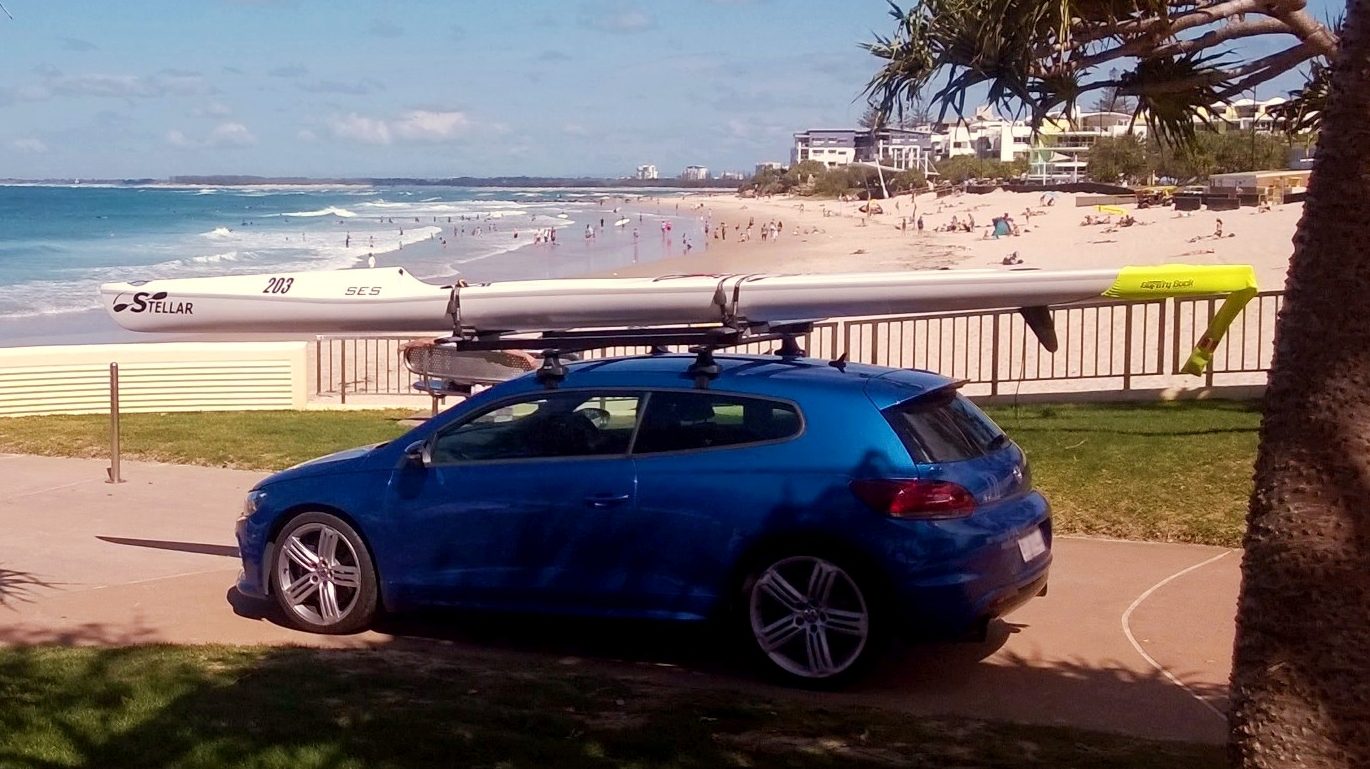 Not all of us are fortunate enough to live right on our favourite waterway so we can just jump on/in our craft and paddle away.  Most of us will (from time to time) need to transport our Ski or Kayak on a vehicle to reach our chosen launch location.

Did you know that (statistically) more craft are damaged in transit than in use?  Mounting a ski on vehicle racks sounds easy, but get it wrong and you jeopardise the safety of your craft, your vehicle, yourself and other road users.

Here are a few tips you might find useful:

So that’s about it, – racks, cradles, tie-downs and flag.  One final thing though.  When you’re driving with a ski on top, REMEMBER IT’S THERE!  Low garage entries have damaged as many craft as the biggest waves, – probably more!  🙂

If the rear projection is greater than 1.2 metres, the rear of the load or equipment must have attached a brightly coloured flag not less than 300 mm. In addition to the flag, when travelling at night or in adverse weather conditions that restrict visibility, a red light or at least two red reflectors must be attached: The red light needs to be seen for 200 metres and the reflectors need to be capable of projecting a red reflection of light. These requirements also apply to any load or equipment that projects less than 1.2 metres, if it projects in such a way that it is not readily visible to a person following immediately behind the vehicle.

Where a load projects more than 1.2 metres beyond the rear of a vehicle, or a projecting load can not easily be seen by a driver following the vehicle, a brightly coloured flag of at least 30 centimetres must be attached to the rear of the load during the day and a red light or red reflectors attached during the night.

You must display a brightly coloured yellow, or red and yellow flag of least 450mm, fixed to the extreme back of the “projecting load”.  You must display a red warning light that is visible from at least 200m away, OR at least 2 red reflectors capable of reflecting the headlights of a following vehicle.  All warning devices must be displayed at the very end of your load; and be clearly visible to other people.

Never carry a load that projects in a way that is dangerous to a person or property, even if the dimension limits and warning requirements meet and comply with the regulations.

If permitted and the overhang exceeds 1.2m rearward from the end of the vehicle, during operation in daylight hours (between sunrise & sunset), a red, yellow or combined red and yellow flag that is at least 30 cm must be affixed to the rear extremity of the load, and If the same vehicle is operated as above during hours of darkness (between sunset & sunrise), a red light or red reflectors visible for 200 metres should be affixed to and clearly displayed at the rear extremity of the load.

Fines imposed for carrying improperly flagged and/or illuminated projecting loads vary between state jurisdictions and may also vary within a jurisdiction depending on the severity of the offence.  These fines range from $252 to $1,100 across Australian states.

NOTE: All states require that the maximum rear projection of the load should not exceed an amount equivalent to 60% of the vehicle’s wheelbase as measured from the rear axle back, regardless of any flag fitted.

Recent Posts
Archives
We have a range of Stellar Skis available for demo paddles so you can be sure you are getting the right ski for your needs and ability.
Book a Demo
Copyright © 2020 - PaddleSmart - All Rights Reserved
Back To Top
×